5 Facts about the Navy SEALs 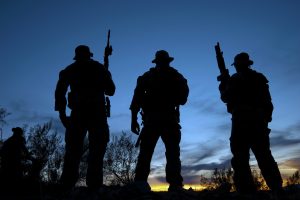 Most people understand that the Navy SEALs is an elite group that is known for completing some of the biggest missions in the history of the United States military. You have probably heard about the intense training that the SEALs go through, as well as the types of missions they are asked to complete on a regular basis.

However, there are details regarding the Navy SEALs that you may not be aware of. Below are five facts that may come as a surprise:

1. The Navy SEALs got its start in 1962. At this time, the group was an Elite Special Force of the United States Navy.

2. The number of Navy SEALs makes up less than one percent of the Navy’s personnel. Do you have what it takes to join this ultra-elite group?

3. SEAL stands for sea, air, and land. This acronym was given because the SEALs are able to excel at sea, in the air, or on any type of land.

5. Women are not allowed to join the Navy SEALs. At the present time, this is the only position in the Navy that is closed to women.

Now that you know more about the Navy SEALs, you can decide if you have any interest in this elite group. Even if you never become a SEAL, you can maintain an interest and continue to learn about SEALs for many years to come. This part of the Navy is not going away anytime soon.