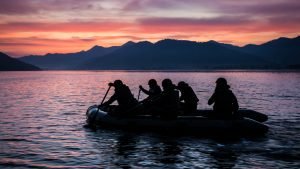 Did you know that only 6% of Navy applicants meet the requirements to become a SEAL? The SEALs are widely popular and respected among the military community. This is because of the intense mental and physical requirements needed for the role.

About half of Navy recruits show interest in becoming a SEAL. Although countless brave men fall short due to the elite prerequisites, there is the one percent who do make the cut. These men are dubbed the legendary title of SEAL and granted their trident insignia.

It’s no surprise that these exemplary men are the subject of navy seal books that decorate the shelves of people across America. Many SEALs are famed for their accomplishments, like SEAL Team 6 and their takedown of Osama bin Laden.

Eric Blehm is among the top military authors and New York Times bestsellers. One of his most popular works, Fearless, details the legendary story of Adam Brown. Adam Brown was a Chief Special Warfare Operator who spent 12 years serving in the Navy.

Brown was a member of the elite SEAL Team 6, which eliminated Osama bin Laden. Fearless details Brown’s life on and off the battlefield. Brown’s extreme personality and love for his family caused him to make the ultimate sacrifice for the country he loved.

Marcus Lattrell is a well-known SEAL among the military and the rest of the population. He was involved in Operation Red Wings and is the only surviving soldier of the mission. Lattrell served eight years and proudly owns a Navy Cross and a Purple Heart.

Chris Kyle is revered as one of the deadliest snipers and SEALs in American history. He confirmed over 150 kills during his ten years of military service. He also received a Silver Star, three Bronze Stars, and a Navy and Marine Corps Achievement medal.

American Sniper is such a popular story that it was made into a film. The book details Kyle’s many tours in Iraq and the personal life of the most deadly sniper in US history.

Jocko Willink is a retired Navy SEAL, United States Navy officer, and former member of SEAL Team 3 and 1. He is widely respected for his wisdom and experience in the military. And he’s commanded some of the most elite units in the Armed Forces.

Extreme ownership is about Willink’s journey in Iraq and the leadership skills he developed during service. His incredible lessons can be applied to all areas of life.

5. The Operator by Rob O'Neill

Rob O’Neill is a retired Navy SEAL who fought in Operation Neptune Spear as a member of SEAL Team 6. He’s believed to be the killer of Osama bin Laden. And he’s been awarded honors over 50 times, including multiple Bronze and Silver Stars.

His book, The Operator, is a New York Times bestseller where he tells all about his life as an elite soldier. O’Neill has participated in over 400 top-secret military missions.

Mark Owen is the pen name of Navy SEAL Mark Bissonnette. Mark was involved in Seal Team 6 and the legendary takedown of Osama bin Laden. He served 13 years as a Navy Seal, and he’s won numerous awards for his service in Iraq and Afghanistan.

No Hero is Bissonnette’s sequel to No Easy Day, his book detailing the bin Laden raid. In No Hero, Mark goes into depth about Seal Team 6 and many top-secret missions.

7. A Warrior's Faith by Robert Vera

Robert Vera is a former close friend of Navy SEAL Ryan Job, who was shot in the face by an enemy sniper in Iraq and lived. Job was a Petty Officer Second Class; his traumatic injury left him blind in both eyes and without a sense of taste or smell.

Vera’s book tells the story of his charismatic friend, who was an inspiration to all who knew him. Job’s story is one of hope, grit, and the courage to keep moving forward.

8. Make Your Bed by William McRaven

William McRaven is a retired SEAL and United States four-star Admiral. He was a member of SEAL Team 6 and commander of the US Special Operations Command. Admiral McRaven was also in charge of 69,000 soldiers and US counter-terrorism.

McRaven’s book, Make Your Bed, is about teaching yourself to be responsible and self-disciplined. All you need to start is simple daily habits like making your bed.

Richard Marcinko is a former US Navy SEAL commander and a veteran of the Vietnam War. He was the first-ever commander of SEAL Team 6 and served for over 30 years. Marcinko served two Vietnam tours, receiving a Vietnamese Cross of Gallantry.

Rogue Warrior is Marcinko’s story of his involvement in creating the most elite SEAL team in history, SEAL Team 6. It’s one of the most popular books on Navy SEALs.

10. Own The Night by Paul Evancoe

Paul Evancoe is a former Navy SEAL who’s worked for the US Department of State, the National Nuclear Security Administration, and the Department of Homeland Security. He’s earned combat awards like the Purple Heart and authored multiple military books.

Evancoe’s Own The Night is a fictional story about a Navy SEAL team and their search for South Vietnam’s greatest treasure. It’s a gripping tale soaked with conspiracy.

Get Your Navy SEAL Books Featured

There you have it—ten new books written by Navy SEALs for your collection! We love and appreciate all our servicemen and women, and we thank you for your service!

If you’re an author who has a book to share with the world, write to us. Additionally, if you have a military story that inspires others, we’d love to hear from you. Contact us today for consideration to get featured, and may God bless our fellow soldiers!