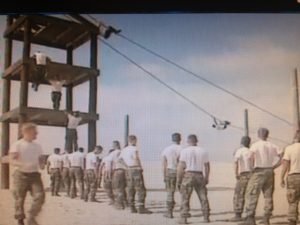 The Navy SEALs are a highly trained special operations unit, and passing their training is notoriously tough. Nearly 75% of men who attempt Navy SEAL training fail to complete it. So, what makes Navy SEAL training so challenging? And is it really the most brutal military training?

BUD/S is one of the most comprehensive military training programs in the world, and for good reason. It's designed to push recruits to their limits. To weed out men who aren't cut out for combat with one of the most elite teams on the planet.

In this article, I'll take a closer look at Navy SEAL training and examine why it's still the toughest in the world. So, let's delve further into what Navy SEALs must go through during their training.

What Is BUD/S Training?

Navy SEAL training is a physically and mentally demanding process that takes place over half a year. Also known as BUD/S, this 6-month SEAL training program tests recruits in every way possible.

During Navy SEAL training, men will face some of the most strenuous challenges imaginable. It starts in Coronado, CA, at the Naval Special Warfare Training Center.

BUD/S' (Basic Underwater Demolition/SEAL) training is where most men fail to pass the course. BUD/S training lasts 24 weeks and is divided into three phases. The phases are listed as follows:

The first phase is 'Physical Conditioning,' and it's designed to weed out men who aren't suited for the ongoing Navy SEAL training. This basic conditioning phase is far from basic and lasts for eight weeks.

It involves the most intense physical activity, as well as mental challenges that a potential SEAL will face. And at week four, recruits have to endure Hell Week.

Hell Week is a period where recruits get no more than four hours of sleep total. They're constantly pushed to their limits with severe physical challenges and mental games designed to test their resolve.

Less than half of the men who start Hell Week actually make it through to the other side. Some men have recently died during training or shortly after completing this phase of BUD/S.

If you can't take the heat, exhausted trainees must ring a bell three times to voluntarily quit Navy SEAL training. It's common for men to 'ring out' during Hell Week due to sheer exhaustion, sleep deprivation, hypothermia, and many more brutal challenges.

The second phase of Navy SEAL training is 'Diving,' and it's where things start to get increasingly tactical. This eight-week phase focuses on underwater demolition and combat diving.

Recruits learn how to use military diving equipment and perform mission-focused combat swimming. They're also introduced to diving techniques and long-distance diving training.

Most men who completed Hell Week will make it through to this phase of Navy SEAL training. However, the dropout rate during the diving phase is still moderate. Some men find trouble with diving physics and other academic subjects. While some men may develop a fear of diving.

After the third phase of BUD/S training, the remaining recruits will go through an additional eight weeks of SEAL Qualification Training which focuses on operations, mission planning, and more.

After this phase, the trainees are officially dubbed SEALs and given their official Navy SEAL trident insignia to proudly wear on their uniforms.

I'll now examine how BUD/S holds up alongside some of the other top training programs worldwide.

The Navy SEALs are often compared to the Army's M-16 Special Forces group. Both units are considered to be the best of the best when it comes to special operations. The Army's M-16 training program is no joke, requiring a unique set of James Bond-style skills.

Like BUD/S, MI6 training lasts for six months, where recruits are given extensive training in hand-to-hand combat, explosives, undercover surveillance, and improvised weaponry.

Spetsnaz training is known for being incredibly tough, both mentally and physically, as is Navy SEALs training. Recruits go through extreme training such as torture and punishment to train them not to crack if interrogated by an enemy group.

Many Spetnaz serve as bodyguards for high-ranking Russian officials. Others work as part of the country's anti-terrorism unit or are deployed to hot spots around the world.

Shayetet 13 is the Israeli elite counter-terrorism sea-air-land forces unit. They are often compared to the Navy SEALs as they have a similar maritime focus and conduct many of the same types of missions.

Shayetet 13's training is grueling, and recruits must go through a six-month training program, with additional phases similar to BUD/S training.

The training is exhaustive as is Navy SEALs training. The unit regularly trains for hostage rescues, counter-terrorism, and maritime warfare.

SEALs Vs. US Army Delta Force

The US Military's Delta Force is considered to be one of the best special forces units in the world. With a 90% fail rate, Delta Force training is known for being incredibly tough. Delta Force recruits are put through a vigorous training program that focuses on speed, endurance, and toughness.

If applicants can get through the initial tests, they are then required to perform an 18-mile speed march, followed by a 40-mile march while carrying a 45-pound rucksack.

Both SEALs and Delta are highly-trained soldiers who are extremely skilled in combat and able to endure any situation. Who's tougher is heavily debated among the military community.

Navy SEALs are still considered to be one of the toughest special forces units in the world. The Navy SEAL training program is an unmatched test on the mind, body, and spirit and has a very high dropout rate.

When compared to other military units, I've concluded that there is still no program that is as exhaustive and comprehensive as BUD/S. Navy SEALs are the best of the best, and their training is a testament to that.

If you're looking for the toughest military training in the world, look no further than BUD/S. Navy SEALs are still the toughest around. If you have any questions about the Navy SEALs, contact us today.